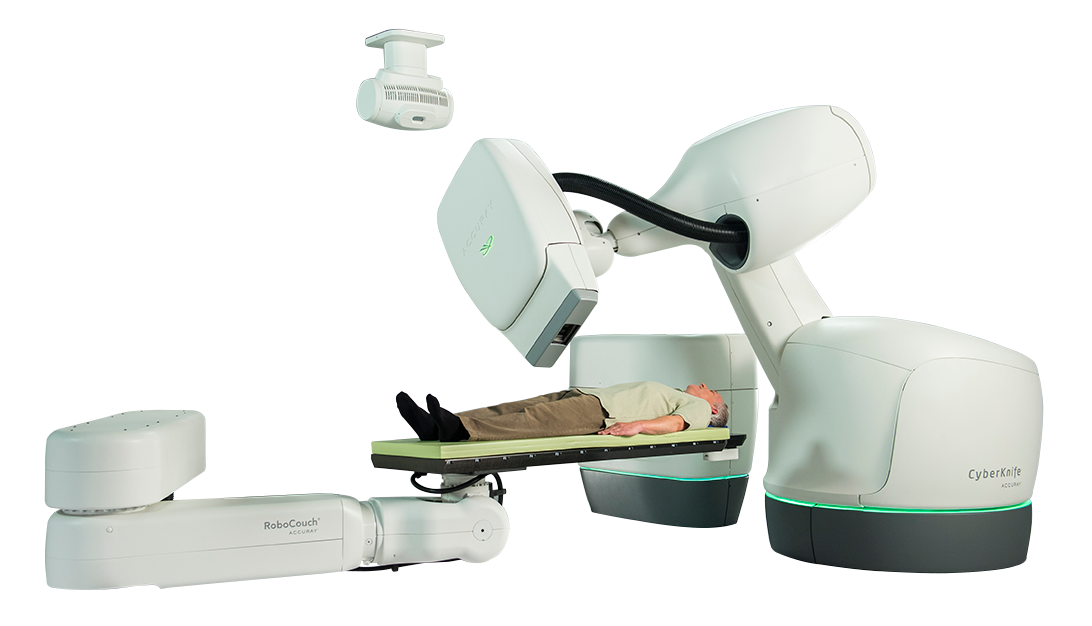 Importantly, 69 percent of men required no androgen deprivation therapy (ADT) treatment within the first five years following CyberKnife prostate SBRT. ADT, also known as "hormone therapy," is the most common treatment given for recurrent prostate cancer. However, its use is associated with unfortunate side effects including loss of libido, hot flashes, bone fractures, loss of muscle mass and physical strength, and weight gain1. The study was recently published online in the International Journal of Radiation Oncology*Biology*Physics.

Hypofractionated radiation therapy involves the delivery of higher doses of radiation over a smaller number of treatment sessions, compared to conventional radiation therapy which requires a substantially longer course of treatment. SBRT uses advanced techniques to deliver ultra-hypofractionated radiation therapy — very high doses of radiation are administered over several days.This treatment process necessitates an extremely high degree of accuracy and precision.The CyberKnife System, designed to deliver SBRT, is the only radiotherapy device that can maintain sub-millimetric accuracy with continual imaging and automatic beam delivery corrections, including rotation, throughout treatment delivery, making it easier for clinicians to effectively treat patients while minimizing dose to healthy tissue.

"Men diagnosed with recurrent prostate cancer after previous radiation therapy have few treatment choices. Most, if treated, receive only ADT which has the potential for long-lasting 'whole body' side effects while rarely eradicating the tumor completely," said Donald B. Fuller, M.D., at Genesis Healthcare Partners in San Diego, California and lead investigator of the study. "This study demonstrates that prostate SBRT delivered using the CyberKnife System offers a viable, non-invasive option for an underserved patient population and most typically delays the need for ADT for greater than five years, which would provide substantial quality of life benefits. From a technology viewpoint, the inherent sub-millimeter accuracy of the CyberKnife System due to its highly unique tracking method was critical to the success and safety of this protocol, allowing the dose to be delivered to the prostate with no additional expansion of the target volume."

Click here to learn about how Dr. Fuller uses the CyberKnife System in his practice.

"This study is significant because it highlights a potential new option for extending symptom-free survival in men with locally recurrent prostate cancer previously treated with radiation therapy," said Fabienne Hirigoyenberry-Lanson, Ph.D., vice president global medical and scientific affairs, at Accuray. "The data reinforces the benefits of the CyberKnife® System's robotic design and motion synchronization capabilities and show why CyberKnife prostate SBRT is becoming the treatment of choice by clinicians who want a high precision, versatile and non-invasive option that provides excellent disease control with minimal side effects."