A new analysis of survival data for the randomized, phase III PACIFIC trial finds adding the immunotherapy cancer drug durvalumab to radiation and chemotherapy significantly decreased the recurrence of lung cancer both in the chest area and in distant sites outside the chest. The update, which provides greater insight into the landmark study that changed the standard of care for patients with stage 3 unresectable non-small-cell lung cancer (NSCLC), was presented Sept.16 at the 61st Annual Meeting of the American Society for Radiation Oncology (ASTRO) in Chicago. 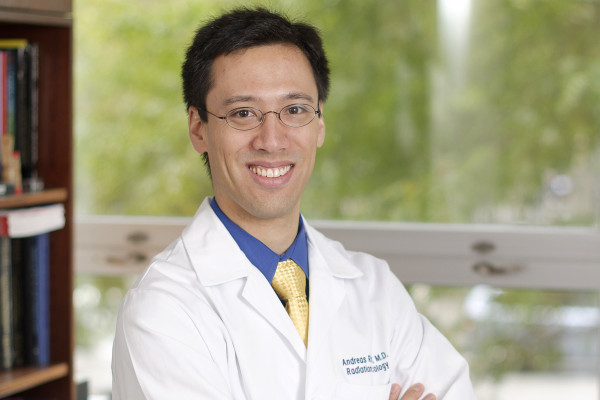 In an independent evaluation of the patterns of disease progression for 713 patients randomized to durvalumab (n=476) or placebo (n=237) after completing chemoradiation, researchers found the immunotherapy drug greatly reduced the spread of cancer to other parts of the body. When the disease did spread, new distant lesions occurred in the brain the vast majority of the time. Because the cancer was not spreading widely throughout the body, findings suggest that aggressive local therapies, such as radiation or surgery, might further extend survival for these patients.

“It’s notable how the addition of durvalumab significantly decreased the distant progression of disease,” said Andreas Rimner, MD, (pictured left) a radiation oncologist at Memorial Sloan Kettering Cancer Center in New York City and an author on the study. “With this type of cancer, you can achieve some control of the tumor within the lung, but it almost invariably comes back elsewhere in the body and there are limited options for what we can do. To have a treatment that truly reduces the rate of lesions developing distantly, and reduces the frequency of these distant lesions, is a major step forward and really improves the outlook for these patients.”

“It is helpful to know that the cancer didn’t commonly come back in multiple different places,” he said. “When cancer returns in just one or two areas, it can be amenable to aggressive local therapies. There is increasing evidence that local ablative therapies may further extend survival for these patients. We can’t say that this is definitively what should be done, as this trial didn’t address that question. But it’s highly suggested by several phase II studies and currently being investigated in ongoing phase III studies including NRG-LU002.”

Lung cancer is the leading cause of cancer death worldwide. Most patients with NSCLC, which accounts for 85% of all lung cancers, experience some continued cancer growth after chemoradiation – approximately half within two years, and 70-80% in the longer term (i.e., more than two years), explained Dr. Rimner.

Trial results published last year in the New England Journal of Medicine showed that adding durvalumab (also known by its brand name Imfinzi) after radiation and chemotherapy extended the time patients with stage 3 inoperable NSCLC lived without the disease progressing and significantly improved overall survival rates. As a result of these findings, adjuvant durvalumab became the new standard of care for patients whose disease had not progressed after concurrent platinum-based chemotherapy and radiation.

This new analysis of disease progression data adds support to the decision to make the addition of durvalumab to radiation and chemotherapy standard practice for patients with NSCLC, said Dr. Rimner. “I think it gives further credence to any doubters,” he said. “The addition of this immunotherapy drug following concurrent chemoradiation really needs to be implemented as the standard of care for these patients."

Next steps in this line of research include mapping out the specifics of delivering this trimodal combination, said Dr. Rimner. "There is some speculation that an earlier start of durvalumab after chemoradiation might be associated with better survival. There also are several other ongoing studies exploring the concurrent use of durvalumab in combination with radiation therapy in various forms."

The abstract, "Patterns of disease progression with durvalumab in stage III NSCLC (PACIFIC)" was presented in detail at ASTRO’s 61st Annual Meeting in Chicago.