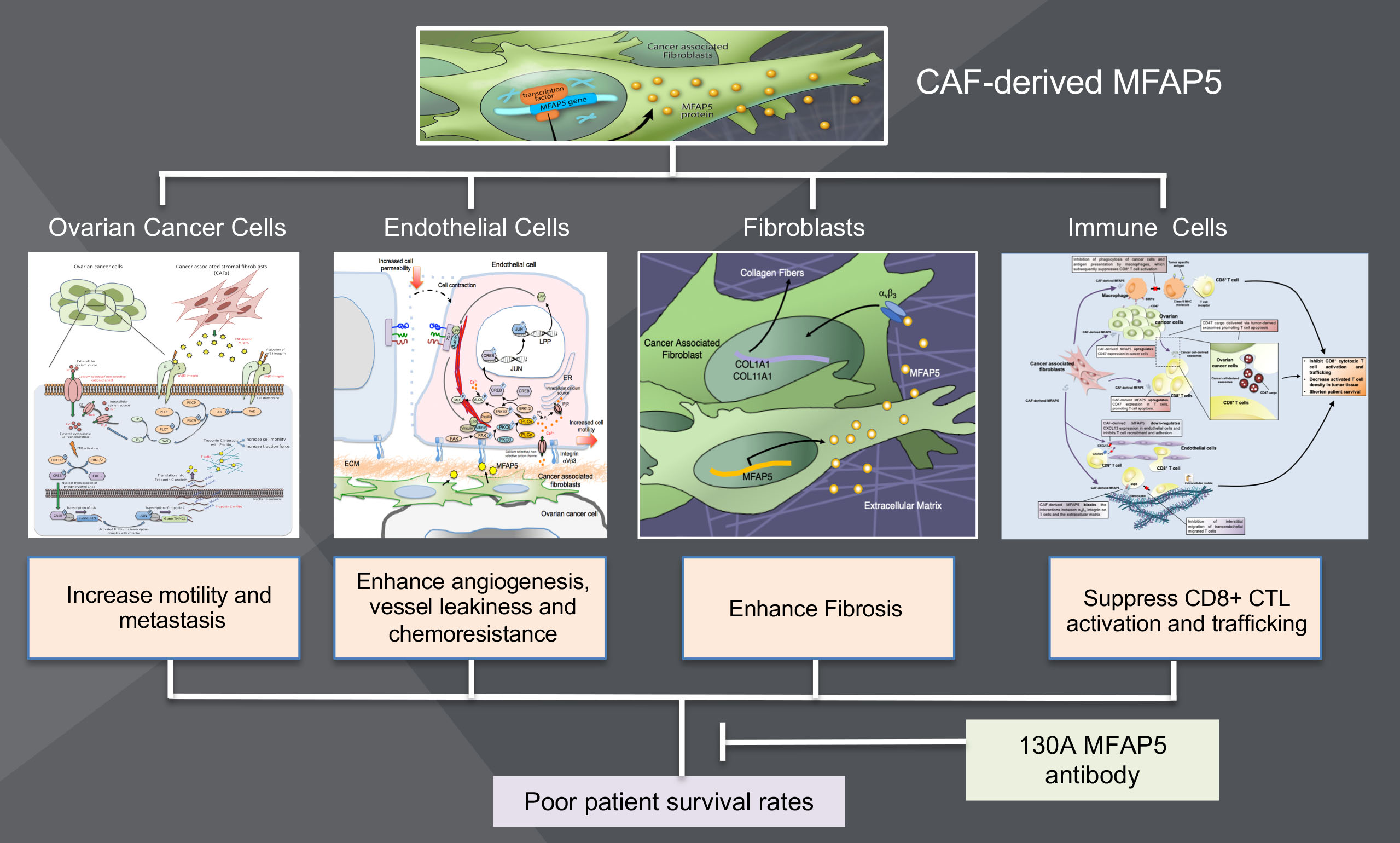 Caption: The creation of monoclonal antibody 130A to block the action of a protein called MFAP5 secreted by the cells surrounding and supporting ovarian and pancreatic tumor cells. Image courtesy Houston Methodist

Known as two of the most lethal cancers, ovarian and pancreatic cancer are often called silent killers since they rarely have early symptoms. As a result, they frequently go undetected until they’re too late to effectively treat.

Cancer scientists at Houston Methodist and The University of Texas MD Anderson Cancer Center have been vigilant about looking for more effective late-stage treatments and may have found one.

In a study published online July 22 in the journal Clinical Cancer Research, co-corresponding authors Stephen T.C. Wong, Ph.D., from Houston Methodist Cancer Center and Samuel Mok, Ph.D., from The University of Texas MD Anderson Cancer Center report that they have found a new type of immunotherapy to try in the fight against these two deadly malignancies.

Wong, Mok, and colleagues developed a monoclonal antibody to block the action of a protein secreted by the cells surrounding and supporting tumors in ovarian and pancreatic cancers, called MFAP5. This protein is found at high levels in patients with both these cancers and associated with decreased survival rates.

“We found that blocking MFAP5 enhances the effectiveness of chemotherapy treatments and suppresses tumor growth in ovarian and pancreatic cancers, as well as inhibits progression of these two cancers in mice,” said Wong, who is also professor of computer science and bioengineering in oncology at the Houston Methodist Research Institute. “This new immunotherapy drug targets supporting cells surrounding a tumor rather than just the tumor cells alone. This tumor microenvironment contains newly developed blood vessels and fibrous connective tissue – created through the processes of angiogenesis and fibrosis – that feed and support the tumor.”

The MFAP5 protein has been shown to trigger the formation of these surrounding elements that supply and stimulate the tumor, influencing how it grows and spreads. Blocking it prevents new blood vessels and excess tissue from forming within the microenvironment, thereby cutting off the tumor’s blood supply and support.

Mok, who is an endowed professor of gynecologic oncology and reproductive medicine at MD Anderson explains, “MFAP5 promotes fibrosis in ovarian and pancreatic cancers, and fibrosis promotes progression, chemoresistance and reduces survival of people with these cancers. By blocking this secretory protein with an antibody, we can treat the tumor by targeting multiple cellular types – fibroblasts and blood vessels -- in the tumor microenvironment.”

Now that they have demonstrated the feasibility of using their monoclonal antibody to target MFAP5 as a new cancer treatment regimen, the researchers are in the process of designing and generating a humanized anti-MFAP5 antibody for further development as a therapeutic agent to treat ovarian and pancreatic cancers. Wong said they expect to have it ready by the end of the year for efficacy and toxicity testing, followed by a Phase I clinical trial in the following year.

“The convergence of biological science, computational science, and engineering has allowed us to achieve such translational discovery,” Wong said.