Lung cancer remains the top cancer killer in the world, accounting for nearly 1.6 million cancer deaths in 2012.1 In the United States, lung cancer resulted in more deaths than colorectal, breast and prostate cancers combined, and will cause approximately 27% of all U.S. cancer deaths this year.2,3 While survival rates are on the rise for many cancers, lung cancer’s 5-year survival rate of 17.8% is decidedly lower than many leading cancer sites: Colon is 65.4%, breast is 90.5% and prostate is 99.6%. Moreover, only 15% percent of lung cancer cases are diagnosed at an early stage; and once the cancer spreads to other organs, that 5-year survival rate drops to a meager 4%.4

Yet there is hope. If lung cancer is detected when the disease is still localized, the 5-year survival rate is as high as 54%. With recent Medicare reimbursement approval of lung cancer screening using low-dose computed tomography (CT) in people ages 55-77 with a history of smoking in the last 15 years, chances are greater for detecting lung cancer at an earlier stage when it is localized and, therefore, more treatable and potentially curable. 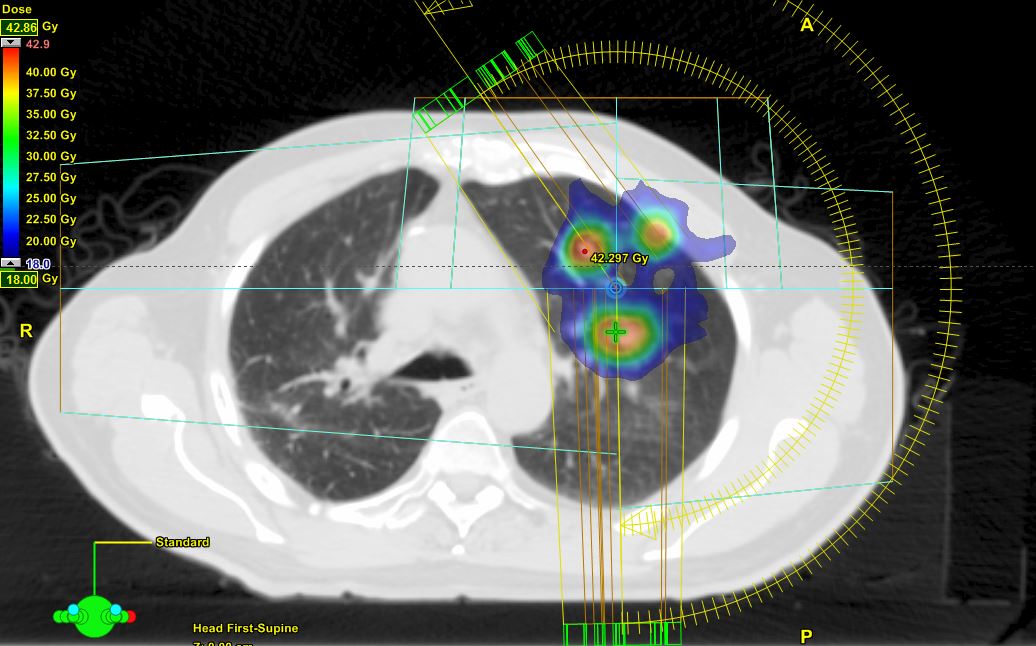 “The data suggests that lung cancer screening can reduce mortality by 20%,” says Russell Hales, MD, director of the Thoracic Oncology Multidisciplinary Program at Johns Hopkins Sidney Kimmel Comprehensive Cancer Center, and associate professor of radiation oncology and molecular radiation sciences at Johns Hopkins University School of Medicine, Baltimore, Maryland. While screening allows for tumor detection at an earlier stage, Dr. Hales warns of the potential to overuse other tools, such as biopsy, and incur potential side effects.

“Technology allows us to give higher-quality treatments, but there is also a learning curve to using them correctly,” Dr. Hales says. Take volumetric-modulated arc therapy (VMAT), for instance. While it may provide more flexibility in planning around critical structures such as the heart or spine, it can add a significant low-dose bath to normal structures, such as the lung. As a result, treatment can unintentionally cause more toxicity than other approaches.

According to Benjamin Movsas, MD, chair of the Department of Radiation Oncology at Henry Ford Hospital in Detroit, Michigan, the biggest advance in radiation oncology that directly benefits lung cancer patients is stereotactic body radiation therapy (SBRT), also referred to as stereotactic ablative radiation therapy (SABR). “This technique has revolutionized what we can offer our patients with early stage, non-small cell lung cancer,” says Dr. Movsas. “It’s a new standard of care for patients who are not surgical candidates.”

Dr. Movsas explains that in these cases, conventional radiation therapy administered daily (Monday-Friday) over 6-7 weeks has a local control rate of about 50%, while the higher biological dose of SBRT (over 3-5 treatment sessions) has been shown to achieve local control rates above 90%.

“This is where the field is starting to ask fundamental questions,” he says, citing recent work by Chang et al that examined outcomes of surgery (e.g., lobectomy) vs. SABR based on data pooled from 2 small randomized, phase 3 trials of SABR in patients with operable stage 1 non-small cell lung cancer (NSCLC). While both trials closed early due to slow accrual, preliminary findings show SABR as a viable option for treating operable stage I NSCLC with results that appear to compare favorably with surgery. However, because of the small patient sample size, further studies are needed.5

“It’s important for patients to know that surgery remains the gold standard in this setting; however, surgery is not always a viable option, especially for high-risk patients,” says Dr. Movsas, “and having an alternative option can be key in select cases.”

In 2014, Dr. Movsas and colleagues completed a study of the Edge Radiosurgery system (Varian Medical Systems, Palo Alto, California) and found that localization accuracy was within 1 mm. “Moreover, with a very high dose rate, this unit can deliver treatments more rapidly, which can enhance patient comfort and convenience.”

Larry Kestin, MD, medical director, Michigan region, and national director of thoracic and lung services at 21st Century Oncology, Farmington Hills, Michigan, agrees that SBRT is one of the most significant advances for treating stage I NSCLC lung cancer. He also notes that additional advantages of SBRT are possible when it is combined with VMAT.

“We can deliver SBRT with three-dimensional conformal, with more classic IMRT, or with VMAT,” Dr. Kestin says. “Any of these technologies can deliver SBRT, which is a certain way to plan the treatment [to deliver] large doses per fraction (e.g., 12 Gy × 4 or 5 fractions, or 18 Gy × 3 fractions. SBRT reduces the total number of treatment fractions, and the best way to deliver SBRT today is with VMAT since it shortens treatment delivery time but maintains the dosimetric advantages of IMRT.”

In an effort to determine the optimal dose to prevent local recurrence, Dr. Kestin and colleagues from 5 institutions pooled data on SBRT and determined that a biologically equivalent dose (BED) of 105 Gy is sufficient to control the tumor.6 “Some commonly used regimens use higher doses,” he says. “This study calls into question whether you need to deliver that high of a dose. We found that 105 Gy seemed optimal.”

Dr. Kestin adds that much of the earlier U.S. data on SBRT indicates that higher doses (e.g., 20 Gy × 3 fractions) are optimal; however, his study also incorporated image-guided radiation therapy (IGRT). “Using IGRT allows us to reduce the margin of normal tissue around the tumor,” he explains. “All patients in the study had CT-based IGRT and were treated in the same fashion, so we know that the dose planned more closely matches the dose that was actually delivered, than for patients treated in the past without IGRT.”

Looking ahead, Dr. Kestin hopes that the advantages of SBRT or hypofractionation can be studied with stage III lung cancer, the most commonly diagnosed stage. “Some studies indicate there are advantages to applying hypofractionated radiation therapy in stage III patients—down to 15 or even 10 fractions. SBRT has been shown in stage I to provide higher cure rates, so it is possible also for stage III to have higher cure rates without increasing toxicity to the patient. It’s an exciting area to investigate.”

Knowledge-based planning may also play an important role in treatment planning. Lung cancer cases can be very complex and often take significant time in the planning stages. Dr. Movsas and colleagues have been studying the use of knowledge-based models (Rapid Plan, Varian Medical Systems, Palo Alto, California), which create treatment plans based on existing plans from a library of one or more institutions. “We have been very pleased with the plans generated by this computer algorithm and found they are comparable to carefully generated clinical plans. We expect that this option will help us improve efficiency in planning over time,” he says, adding, “The more we can learn from our prior collective experiences to help the next patient, as well as our colleagues, the better.”

Respiration and 4D imaging in planning

Another challenge of treating lung cancer is that it is a mobile target, says Dr. Hales. Most clinics use respiratory gating or fiducial markers (both skin and implantable) to track tumor movement during the respiration cycle. Tumor movement will vary, he adds, based on its location and size, as well as the patient. While some tumors are static—moving less than 1 mm—others, particularly those in the lower lung close to the diaphragm, can shift more than 20 mm per breathing cycle, he says.

As part of an NIH grant, Dr. Hales is investigating dynamic, or 4D, MRI to track tumor movement. While 4D CT is often used to determine how a tumor moves during therapy, it only captures 10 to 12 seconds and delivers ionizing radiation to the patient, he says.

“With dynamic MRI, we can track the tumor for 20 to 30 minutes with a safe, nonionizing method that can allow us to better understand how a patient breathes and how the tumor moves,” Dr. Hales explains. He can then use this information to see how accurately the tools used in treatment track the tumor. Dr. Hales anticipates the study will enroll its last patient in the fall.

Another approach is to use an internal target volume (ITV) based plan using 4D CT simulation to track the respiratory cycle over time. This technique allows users to incorporate those changes when targeting the tumor in the treatment plan.

While technology is making treatments better and safer, improving survival and curative rates is what’s most important. With systemic burden a key issue in treating lung cancer, it’s imperative that radiation oncology and medical oncology explore the combined use of immunotherapy with radiation therapy, says Dr. Hales.

Dr. Movsas agrees that personalized medicine is making an important impact in the overall management of lung cancer patients, and genetic testing will play an even more significant role in the future. Beyond the future of molecular genetics, Dr. Movsas is passionate about patients’ quality of life (QOL). He and his team are about to embark on a phase I/II clinical trial evaluating the safety of the proprietary compound BIO 300 (Humanetics Corp., Minneapolis, Minnesota) and whether it can lessen damage to normal lung tissue and enhance QOL during concurrent chemotherapy and thoracic radiation therapy in stage III lung cancer patients.

The introduction of novel PET agents may also help further personalize oncology treatments. Dr. Kestin says that while 18-FDG works well in helping clinicians diagnose and stage cancer, it may also show uptake due to inflammation. It’s important to identify response of the tumor before and after treatment for patient follow-up, and having a PET marker that is less susceptible to inflammation would be helpful. One such marker being studied is 18-FLT, which has been shown to be an effective measure of cell proliferation. Increased cellular proliferation has been shown to correlate with poorer outcomes for many types of cancer; therefore, FLT or other markers may be a useful prognostic predictor of a patient’s outcome.7

“Lung cancer is not a one-size-fits-all,” reminds Dr. Hales. “It has a unique molecular structure in patients, and we need to personalize each patient’s care moving forward by understanding the specific profile of a tumor.” Dr. Hales says.

Mary Beth Massat is a freelance healthcare writer based in Crystal Lake, Il.