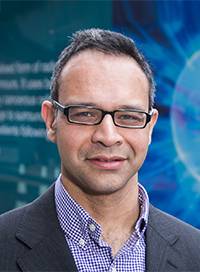 Dr. Sharma has personally served as the global chief investigator in 15 phase I, II or III clinical trials in the fields of radiation, medical and interventional oncology, including multi-center, pivotal randomized controlled trials testing new drug-radiotherapy combinations which have enrolled over 2,000 cancer patients. He is a Fellow of the Royal College of Physicians and the Royal College of Radiologists and he has published over 200 articles in scientific journals.

Prior to joining Varian, Dr. Sharma was the Chair of Radiation Oncology at University College London, UK, where he will continue as an honorary clinical professor. He is also a visiting professor at several universities in other countries.

"Dr. Sharma is an international authority on the multi-modality treatment of cancer with precision radiotherapy as well as on the translation of radiobiology from the laboratory to the clinic," said Dr. Khuntia. "His experience of leading practice-changing international clinical trials and his well-established track record in taking cancer care innovations from the scientific laboratory to patients in the clinic will be critical in demonstrating a strong evidence base for Varian's new technologies in the fight against cancer."

"It is an honor to join Varian to spearhead its ongoing efforts to provide the best treatment to patients anywhere in the world," said Prof. Dr. Sharma. "I am proud to be part of a company that innovates, supports and simplifies cancer-fighting solutions everywhere to create a world without fear of cancer."

Dr. Sharma obtained his medical degree and an M.A. from the University of Cambridge, UK, and subsequently a PhD from the MRC Toxicology Unit, University of Leicester. Dr. Sharma was an Associate Professor at the University of Oxford, UK, where he was a consultant in Clinical Oncology.  He has a clinical practice in chemotherapy and radiotherapy, which he will continue.